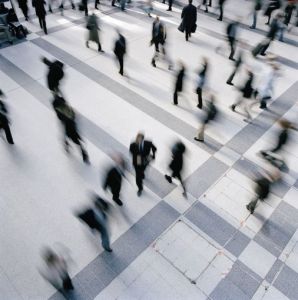 The Pace of Life. I envision humanity on one large hamster wheel, going faster and faster, with the illusion that if we slow down, the world will pass us by. As I reflect back on my career as a professional, I recall when there was a such thing as an 8 hour day, with an hour lunch, where I patronized a local restaurant with my colleagues and friends. Vacations were a week or two in length, afterwards feeling relaxed and ready to get back to work. It was not long before my company announced that food carts would be distributed among the offices so that we could grab a salad or sandwich to consume at our desk. Workloads continued to increase.

Pagers were the first technology to keep us tied to our work. Then it was announced that it was considered valiant to give up vacation time to help the company reduce costs. Pagers became 24/7 emails, and then smartphones, where we were expected to be on call wherever, whenever. Vacations were often reduced to long weekends, realizing that the price to pay for a longer vacation was too significant. Is the pace really getting humanity to a better place? As I look out at the world today, and measure this in terms of overall happiness vs. stress levels, I do not think so. I meet so many people that admit to higher stress levels while attempting to juggle the basics of a demanding job, raising a family and taking care of self.

Technology. I am a huge fan of technology. I love the capabilities that now exist as a result of having so many capabilities with my smartphone. Growing up in the 60’s we experienced some major technological innovations that made their way into the home. The first was the microwave. Then came prepared foods.  They were advertised as introducing more leisure time. Did that ever occur? I do not think so. Zooming ahead to today, I can now look up new restaurants and reviews while en-route to a location to determine where to eat and order ahead of time. It does feel more convenient, but to what end in mind? I sit at the restaurant and notice that many of the patrons are on their smartphones as they sit across from their guests, spouse, family, etc. Then I start checking for scores and responding to emails. Hmmmm.

Breaking News. The advantage with the internet these days is that I can stay appraised of so much of what is going on around the world. But now I no longer trust the sources anymore with the advent of fake news. Everything now is about “Breaking News.” It grew old and now I am immune to this. It was always something negative anyway. At the suggestion of my counselor, I stopped watching news or looking up information about headlines I hear about. It took a couple of weeks to ween off this addiction. Every once in a while I see the news while at the gym, and it is the same thing, over and over again. I do not miss it anymore, and find that my mental health has improved.

Change. The pace of change is accelerating, and is impacting virtually every aspect of life today. Environmentally, we are on the verge of major changes due to climate changes. Abnormal has become the new normal. Politically, I am not sure anyone can make sense of the state of global leadership today. Is it about the citizens anymore? Terrorism has replaced world wars, and can happen at any moment and in any location and by man, woman or child. Companies are consumed by competition, demanding more and more from their employees to fight what seems to be an eternal battle. All it takes is a blip in the economy or company profit statement, and the safety net beneath us fails. 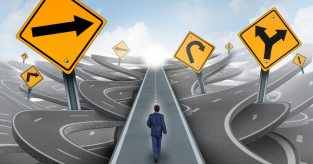 Is this another doom and gloom post? No, its just Chaos. The study of science today is amazing when you stop to consider the implications of what is being discovered. Chaos is just one of many emerging topics. Chaos is the result of a growing number of events that each have the impact of a butterfly flapping its wings and having an impact on global weather patterns. The key is to understand the patterns associated with chaos vs. being so absorbed in one or all of the changes. Chaos is necessary to break a pattern that is no longer working. The challenge is seeing the pattern, and determining the elements that are unhealthy or in need of change. So what is this underlying pattern today causing this chaos?

I believe that the chaos today is a result of humanity being at a crossroads. We are clinging to the principle of “me” being more important than “we”. It is the battle between the ego and that part of us that looks outside of self. The challenges we are facing today require cooperation on a global scale to resolve climate, economic, health care, terrorism, and other global changes. We arrived at this crossroad a couple of decades ago, where we began to see amazing changes towards being more “we” focused with; the bringing down of the Berlin Wall, the end of Apartheid, the breakdown of Communism, the improved role of women today, accepting more diversity (e.g. LGBTQ), and the development of the European Union, NAFTA, etc.

Yet, it is a human evolution is a painful progression filled with retreats and wins. No Pain, No Gain, which is characteristic of human development. It is filled with contrasts. Watching this year’s Olympics place greater emphasis and acceptance of gay individuals than ever before was amazing. A tiny window emerged to the hopeful resolution of North vs. South Korea, with the Olympics being in South Korea. Yet at the same time, politics is resulting in a stalemate, unable to make progress going forward while both sides are becoming more polarized, and resisting working together. Education is no longer keeping up with the times or making use of technology to learn (e.g. Khan Academy), or teaching topics that are relevant to the world we live in today (e.g. compassion, collaboration, leadership, problem-solving, self-awareness, etc.).

So not to be one to sit and just point a finger, I offer a suggestion. What if we start asking ourselves if a win-win resolution can exist, and challenge ourselves to work towards this vs. retreating in judgement and holding to our views. What if we were to invite our competition to our boardroom and identify ways we can both win? Imagine the resources that can be saved by not focusing on competition, and instead collaboration. We could put the resources saved towards solving our global issues. What if we learn from the efforts made to create the European Union, and instead of retreating back to individual economies, continue to build a global economy, where everyone wins and shares the wealth that exists? What if we were to start thinking about what is better for Earth and humanity to survive and flourish (we) vs. this quarter’s profits (me)? What if we were to focus less on negative events, and more on positive events? Can we break a link in the chain towards creating a negative self-fulfilling prophecy, by giving negativity less air time?

There are so many examples of cooperation happening today between countries, governments, companies, local groups, and even individuals. Imagine the impact of focusing more on these activities, and placing the attention in the media on these events. This would result in a much better form of copycat activities! It is amazing to see the impact that the students are now having on influencing new gun legislation that adults just bickered about.

Remember, the change begins with you. At the core, humanity is good. We see this every time disaster strikes. Those coming to the aid outweigh the few who are there to take advantage. Yet we focus on the few. Let’s start focusing on all of the good that is taking place, and become a part of it!

Here is one example that caught my eye. This was published by CNTV on 12/1/17 (link)

Chinese President Xi Jinping, also General secretary of the Communist Party of China (CPC) Central Committee, called for global cooperation to tackle the unprecedented challenges that all human beings are facing nowadays. Xi said correct choices should be made when historical opportunities come and should work jointly towards building a “community of common destiny.” Xi made the remarks on Friday during a keynote speech at the CPC in Dialogue with World Political Parties High-level Meeting, held in Beijing from Thursday to Sunday. Leaders from over 200 parties and political organizations from more than 120 countries have gathered in the Chinese capital for the event which highlights the CPC’s efforts to promote its international vision worldwide. The meeting is organized under the theme “Working together towards a community with a shared future for mankind and a better world: Responsibilities of political parties.”

What an amazing vision! Who cares what the self-motivation may be. Fund it and let’s go. Sign me up! I have a great agenda beginning with brainstorming a list of the key global issues, prioritizing them using an Effort/Impact matrix, boiling it down to the top 3, identifying root causes and then solutions. We then solicit volunteers from across the globe to identify activities already underway and determine how to expand upon these efforts on a global scale.

One thought on “Chaos and the Evolution of Humanity”

Michael has been recognized for many outstanding achievements in his role as an educator and leader. He is published and has spoken at national conferences. His career and experiences are broad in nature providing the unique opportunity to relate well to virtually everyone he meets. Fundamental to his personal journey was his realization of the impact growing up in a dysfunctional family had on his self-esteem and self-image, along with the unhealthy beliefs that had formed affecting his ability to experience love and happiness. Through the use of what he refers to as "Tools for Self-Discovery" he was able to peel away the layers to identify his core issues, heal the pain, and form new beliefs conducive with being happy.

His journey represents a modern day vision quest. It began with his departure from his “success” in Corporate America in search of himself. The journey included backpacking across the globe, and volunteering in numerous capacities related to understanding death and dying, thereby giving greater meaning to the diversity and value of life. He returned to be married, raise 3 children and continue his career.
His quest continues to gain a greater understanding of the self-discovery process, applying new techniques first to himself, and then using his stories and broad experience on this topics as a source of inspiration and direction for others.

"Discovering Michael" has been published by Balboa Press, a division of Hay House. Check out the book's website for more information.

Thanks for stopping by and sharing your comments.